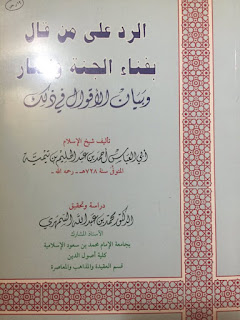 "As one of his false beliefs, he [Ibn Taymiyya] has stated: Hellfire will end."

Dr. Ebubekir Sifil has published an article in 2006 discussing Ibn Taymiyya's position in detail. The full text (which is in Turkish) can be reached with either of the following two links:

Dr. Sifil notes that the following scholars/authors have affirmed that Ibn Taymiyya denied the eternality of Hellfire:

He then says that this list can be increased by several orders of magnitude.

There is also a subsection titled "al-Albani's Confession" in Dr. Sifil's paper. Al-Albani is quoted to say:

"Ibn Qayyim has a second opinion according to which Hellfire will never end. Ibn Taymiyya has a book refuting those who say Janna [Paradise] and Jahannam [Hell] will cease to exist. At that time [20 years ago] I thought that Ibn Taymiyya shared this second opinion of Ibn Qayyim. The author al-San`ani, with what he has quoted from Ibn Qayyim, explains that the above mentioned refutation [written by Ibn Taymiyya] is not against those who say Hellfire will end, but it is against the jahmis who say Paradise will cease to exist and he [Ibn Taymiyya] states that Hell will cease to exist. Moreover, he does not state only this, but states also that the people of Hell will enter paradises with rivers flowing under them after Hell ceases to exist."

What is perhaps most interesting about the texts discussed here is the discourse regarding the fate of Hell's inhabitants... And even though Ibn al-Qayyim dismisses Ibn al-‘Arabī’s vision of Hell becoming a place of felicity, his conclusion is seemingly more radical: That all – Pharaoh, the people of Thamūd, and Abū Lahab will eventually inhabit Heaven after becoming purified. This may explain why both Ibn Taymiyyah and Ibn al-Qayyim seem to go greater lengths and exert a considerable amount of effort to demonstrate that their position does not go against unanimous consensus.

Source: Muhammad Hassan Khalil, Muslim Scholarly Discussions on Salvation and the Fate of Others, (Ph.D. diss., University of Michigan, 2007).

Dr. Sifil concludes his paper with the following statement:

Ibn Taymiyya has accepted and defended -in a manner that does not allow any interpretation or denial- the opinion that punishment in Jahannam will not last forever for kafirs [nonbelievers] and mushriqs [polytheists]...