Position of al-Taftazani Regarding the Companions

Certain statements by al-Taftazani (rahimahullah) are misused and distorted by some people to attack and disparage Sayyidina Mu'awiya (radiyallahu ta'ala anh) and some other Companions  (radiyallahu ta'ala anhum ajma'in). A close examination of what al-Taftazani wrote on these matters, however, will show that his position is in general agreement with the well-known Sunni creed.

The following are two pages from al-Taftazani 's Sharh al-Aqaid: 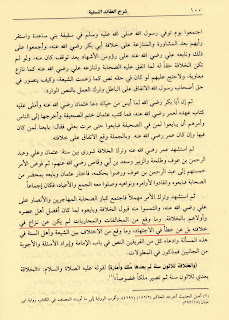 A translation of the relevant passage is as follows:
"The dissensions and conflicts which took place were not because of a quarrel over the question of his [Imam Ali's radiyallahu anh] Khalifate but because of an error in ijtihad." 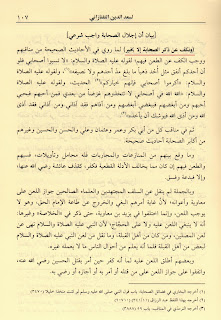 Only the good concerning the Companions should be mentioned of them:

This is on account of their merits which are mentioned in sound traditions, and because it is necessary to refrain from reviling them since the Prophet has said, "Do not vilify my Companions, for if one of you should spend as much as Mount Uhud in gold he would not attain the standard of one of them, no, not even half of it." He also said, "Honor my Companions, for they are the best of you, and so forth," and, "Allah, Allah, and regarding my Companions do not make them a target after I am gone, for whoever loves them, with my love loves them, and whoever hates them, with my hatred hates them; and whoever harms them has harmed me, and whoever harms me has harmed Allah, and whoever has harmed Allah is about to be taken by Allah."

There are sound traditions regarding the merits of Abu Bakr, Umar, 'Uthman, 'Ali, al-Hasan, al-Husayn and others of the important Companions. As for the disputes and conflicts which occurred among them, there are reasons and interpretations for these. Then as to vilifying and reviling them, this is Unbelief if it contradicts the absolute proofs such as in the case of defaming of 'A'isha; otherwise it is an innovation and evil-doing.

Note: The above translations were taken -without modification- from the English translation printed by Columbia University Press.