Imam Birgivî rahimahullah  (d.981/1573) is a well-known and respected scholar of the Osmanlı (Uthmani, Ottoman) state. I have seen Wahhabis and Deobandis quoting passages from this book wrongly attributed to Imam Birgivî  to accuse Sunni Muslims with shirk. Therefore, it will be beneficial to blast this Wahhabi/Deobandi balloon -inshaAllahu ta'ala. Here are two typical examples of misuse/abuse of Imam Birgivî's name: 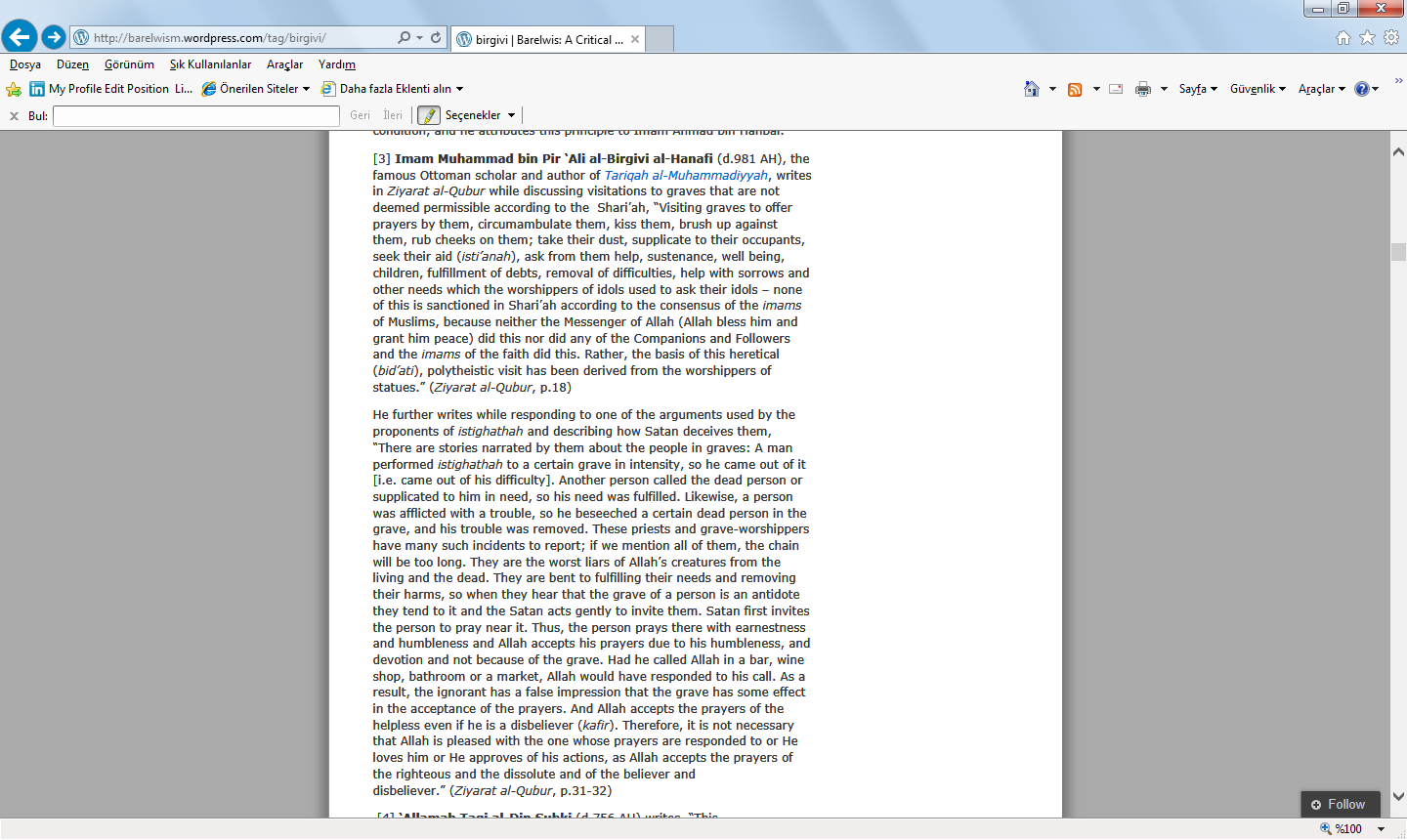 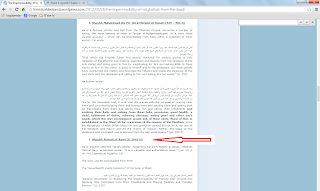 A relatively recent work has demonstrated that the book named Ziyarat al-Qubur (Visitation of Graves) was not authored by Imam Birgivî rahimahullah. The work in question is the following masters thesis by Ahmet Kaylı:

Summary: This study examines how one of the most influential and controversial Ottoman scholars of all time, Birgivi Mehmed Efendi (929-981 / 1523-1573), was perceived and received by other Ottoman readers and writers in the centuries following his death. This it accomplishes through a critical analysis of his bibliography on the one hand, and through a study of the historical dissemination of his works on the other. By critically handling the over one-hundred texts that had been attributed to Birgivi, the study identifies many misattributions to him and illustrates that some of these false attributions were directly instrumental in turning Birgivi into an anti-Sufi scholar with an uncompromising salafî persuasion, an image that is still well and alive, if also increasingly questioned, in the present time. The thesis also scrutinizes the inventory of Birgivi’s own works in order to establish as accurately as possible the relative significance of each work and the role that each might have played in the formation of the image of the author as well as in the determination of his reception. Finally, by exploring the dissemination of manuscript copies of these works based on the manuscript libraries in Istanbul, the study first proposes a historical map of Birgivi’s works in the seventeenth and eighteenth centuries, and then tries to understand and explain the dissemination in the historical context and in relation to the developments of the period.

The following are selected passages from this thesis (page numbers in parentheses refer to the thesis; other sources mentioned in these passages are listed below as "References"):

“This work, which is variously called Risâle fi ziyâretil-kubûr, er-Reddu’l-kabriyye, Risâle fî menhiyyâti’l-kubûr, and Müntehabu Iğâseti’l-lehfân, is a treatise that has been composed by way of selection from Ibn Kayyim al-Jawziyya’s (d. 751/1350) book Iğâsetu’l-lehfân fi mesâyidi’ş-şeytân. This much is stated by the author at the beginning of the treatise. The selection is about the manner and rules of visiting graveyards and saints’ tombs.” (p. 53)

“Risâle fî ziyâreti’l-kubûr has recently found attraction in the salafî circles: an edition of the work was made in Riyad in 1995 as a work of Birgivi, and a Turkish as well as a Bengali translation was prepared based on this edition.” (p. 58)

“Ahmet Turan Arslan ...stated doubt about its Birgivi authorship. The reasons for his doubt are that early sources do not mention this treatise among Birgivi’s works, and that Birgivi does not refer to the work in the chapter on visiting cemeteries in Tarîkat-ı Muhammediye which he wrote shortly before his death, though he does refer to other risales of his own in relevant chapters of this work.” (p. 53 and footnote 121)

“Huriye Martı provides convincing proof that this doubt is warranted. Martı emphasizes that it is not of Birgivi’s habit to rely on a single source and compose a treatise as a summary of that work. She also finds it significant that no reference is made to any of the classical Hanafi sources to which Birgivi amply refers in almost all of his works.” (p. 53 and footnote 122)

“It [Risâle fi ziyâretil-kubûr] was ascribed to Birgivi by Nihal Atsız ... there are in Istanbul libraries at least 16 manuscript copies of this selection [Risâle fi ziyâretil-kubûr], but Atsız mentions only one copy and Arslan adds a second one. We have checked all of the copies, but none displays the name of Birgivi –not even the single copy mentioned by Atsız. Atsız must have ascribed the work to Birgivi simply because the volume containing that copy contains also a number of treatises by Birgivi.” (p. 53)

“The author of this work is, we believe, Ahmed Rumi el-Akhisari (d. ca. 1043/1633), as one of the manuscripts (Süleymaniye Kütübhanesi [Sulaymaniya Library], Fatih 5387, ff. 71a-86b) openly ascribes it to him. This is the only manuscript copy to specify an author for the work. But there are other reasons to believe Akhisari’s authorship of it. For example, some of the copies are in volumes consisting exclusively of Akhisari’s work.” (pp. 53-54)

“There is evidence suggesting Akhisari’s affiliation with the Kadızadelis. A note in a manuscript relates that Akhisari was a student of a certain Kadızade.” (p. 60)

“It is clear that Ibn Kayyim is one of Akhisari’s sources of inspiration, at least on the question of visiting graves and saints’ tombs. In the relevant section of Tarîkat-ı Muhammediyye, the magnum opus of Birgivi which he composed shortly before he died, however, there is no reference either to Ibn Kayyim’s book or to this selection [Risâle fi ziyâretil-kubûr], while it is Birgivi’s habit in this work of his to refer, in relevant places, to his own treatises.” (p. 56)

“There is no reference to Ibn Kayyim al-Jawziyya or his work in Birgivi’s Tarîkat-i Muhammediyye... as there is no evidence indicating Birgivi’s familiarity with Ibn Taymiyya (d. 728/1328) and his students.” (p. 57)

“[Dr.] Lekesiz acknowledges, ... in his unpublished dissertation supervised by [Professor Ahmet Yaşar] Ocak and completed in 1997, that there is no reference to Ibn Taymiyya in any of Birgivi’s works.” (Footnote 138 on p. 57)

The following are scanned images of a few pages from Dr.Kaylı's thesis: 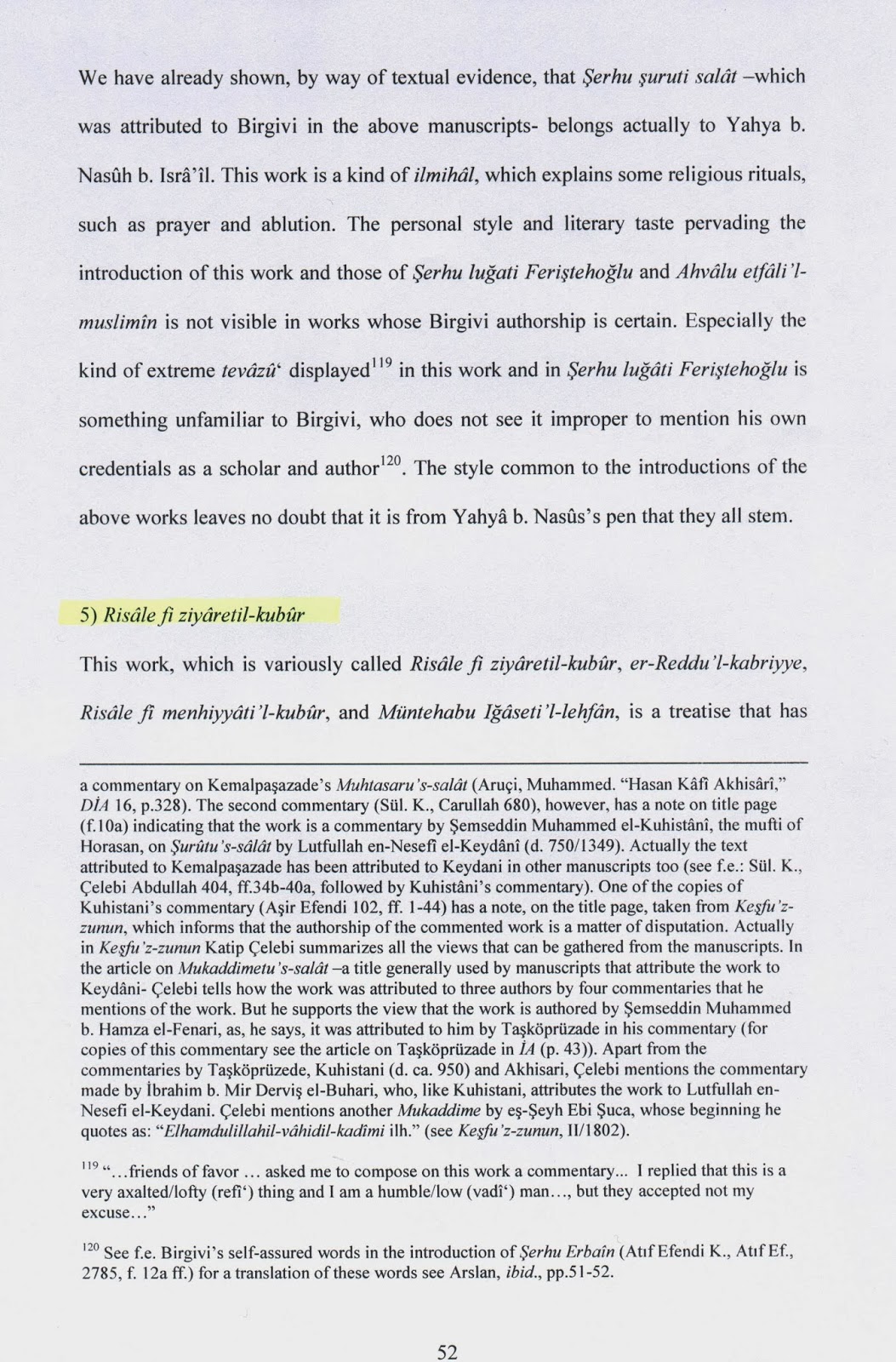 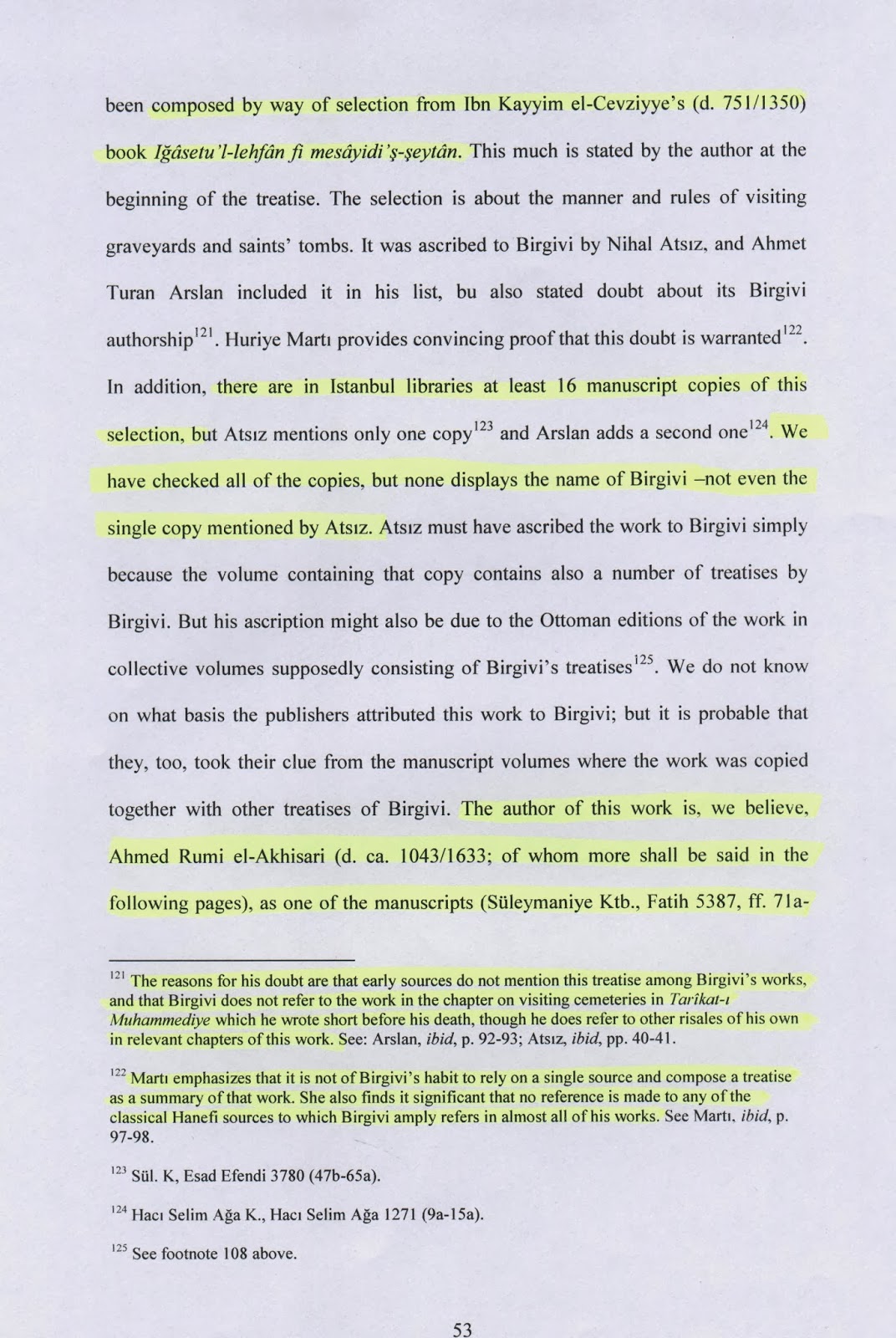 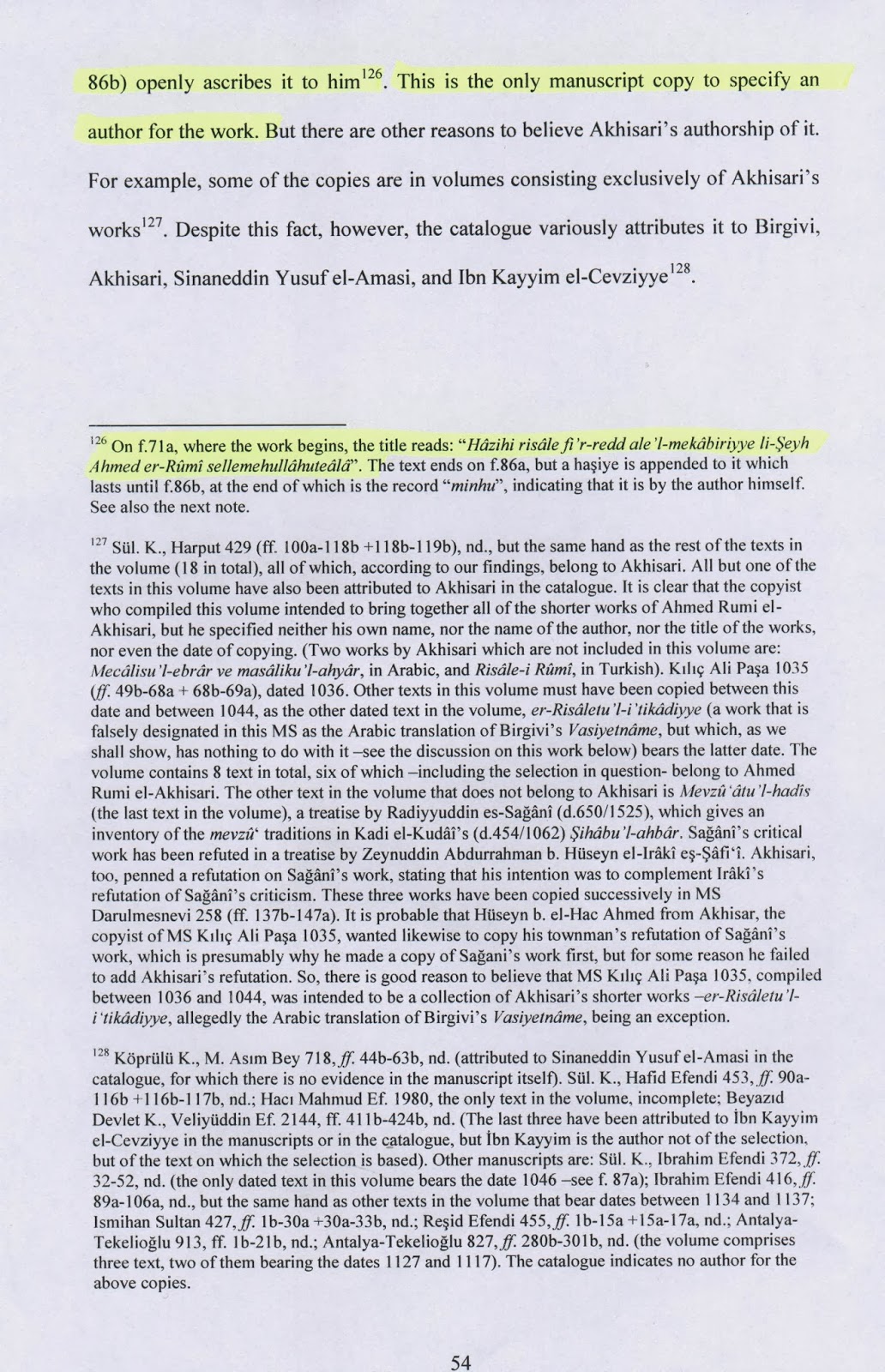